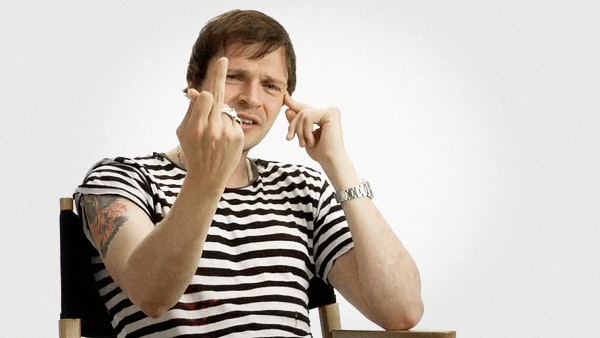 Hello, this is the about page for Ryan Gerber.

So who is Ryan? Well...Ryan is a freelance Creative Director and Film Maker...amongst other things.  He works mostly in advertising. he grew up on Guam and Hawaii. he doesn't eat salad. He's seen Iron Maiden in concert. 4x and was at the very last Slayer concert at the Forum in LA. It was quite emotional. He's an Art Director by trade, but a ditch digger at heart. He thinks Charles Bronson would kill Chuck Norris in a street fight. He just would. He's written a couple of feature films. Done artsy stuff like hold shows in foreign countries. And edited an infomercial. Yep, he edited the hell out of that infomercial. He likes certain things deemed "digital" but he doesn't think that entitles him to anything. He also likes TV commercials (mostly his own) and most of the primetime lineup from 1982, which means he still wants to be Magnum PI when he grows up. He's won awards and spoken in front of large crowds of people. He's had the privilege of working with some of the best and the brightest. His heroes, really. He's also been asked to fetch the coffee. He's failed big and he's won big. He failed again, but bigger. Better. He likes to make stuff and has done so in almost every medium. That means he's made banners and catalogs too. He anticipates several new mediums to pop up as the industry continues its shape-shift. He'll want to make stuff in those mediums as well. He also lived in China for almost 4 years... Along with Sam and Rob, so he's very fond of doing international sorts of things.

Here are some places you can find him:
WorkingNotWorking
LinkedIn
Instagram
ryangerber.com

Oh and the video above, was a farewell video his team made for him when he left R/GA. It's mostly true and was very sweet... even if Nick Law called him an asshole.